The Who's Pete Townshend has revealed that Roger Daltrey was not a fan of the new songs that were written for the new Who album when he first sent them to him.

The 74-year-old rocker told how his bandmate is a “difficult” person to write for, but that what they have finally produced has filled him with excitement.

Speaking exclusively to Gold Radio, Pete explained: “What I’m proud of is that I managed to get 12 or 13 or 14 songs past Roger Daltrey, who’s a very, very difficult guy to write songs for. He likes to get inside songs.

“He’s like a really great writer, like Christopher Plummer or somebody, who, unless he’s doing Shakespeare, the writing needs to be top-notch.

Watch the full interview with Pete Townshend in the video above

“So I was relieved. It took him a long time to get back to me. I sent him the songs in August of 2018, and he didn’t come back to me until Christmas.”

Pete went on to reveal that Roger “didn’t like” any of the songs he had written, suggesting he release them on a solo album.

Pete laughed: “No, he didn’t like any of them. But he agreed to try to record them. And then when he started to record them, he did like them, but he said to me that he thought that they would be good for me to sing.

“I said, ‘I don’t want to sing. I want to write the songs’. Anyway, he’s done an amazing job. He’s sung them really, really well.

“I think that’s been important for me, because I thought, ‘I can actually still write for this guy’. I’ve been working for him since I was at school, and I can still write songs that serve his cause.”

While the pair both feature on the songs, the duo never recorded together, opting to work with different producers before combining what they had created.

Pete said: “We didn’t get into the studio together at all. We worked in parallel. I did the basic tracks at home, in my home studio, in the summer of 2018.

“We started to tighten up the recordings in February of this year, and he went into the studio and started doing vocals in March. We never once crossed paths. He used a different producer for his vocals, and then we added the vocals to the tracks.

The Who's rock opera 'Tommy' will return to Broadway in 2021

“But I have to tell you, it sounds like band. I don’t know how, but it does!”

The Who once featured on an episode of The Simpsons, but Pete refused to record his voice, forcing show creators to use his brother Paul Townshend's voice for the animation.

Noting other projects he was offered, turned down and now regrets, Pete nodded: “Oh, yes. Blade Runner. I was offered the score of that.

“I’d read the script, and I said to Ridley Scott, ‘I can’t make head nor tail of it. It’s nonsense’.”

Pete’s new book The Age Of Anxiety is out now. 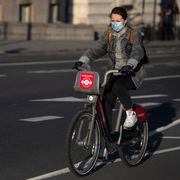