Gold is now national across the UK, with James Bassam on The More Music Breakfast Show!

From today (June 10), Gold has launched nationwide, on DAB!

We are also delighted to announce that James Bassam has joined the station as the new host of Gold’s More Music Breakfast, playing the Greatest Hits of All Time every weekday from 6am to 10am.

James brings a wealth of experience to Gold, having been presenting various music shows for the past 25 years.

"Growing up, in our house the radio was the first thing to be switched on in the morning," James said.

"It was magical, the excitement of hearing the best songs played by a DJ who sounded like he was having the time of his life, was addictive to me. I had to be that guy and now... here we are."

His show features the Six Snooze-busters at Six, 3 Big Number 1’s at 8 and the infamous Golden Year at 9.

David Andrews will continue presenting on Gold, hosting weekend mornings from 8am to 12pm.

Gold can now be heard across the UK on D1, which will also be a DAB+ station in stereo.

So, make sure to join James on the More Music Breakfast show on Gold every weekday, from 6am to 10am, where he will continue to play the Greatest Hits of All Time.

Head here for all the different ways you can listen to Gold. 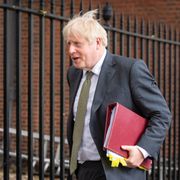