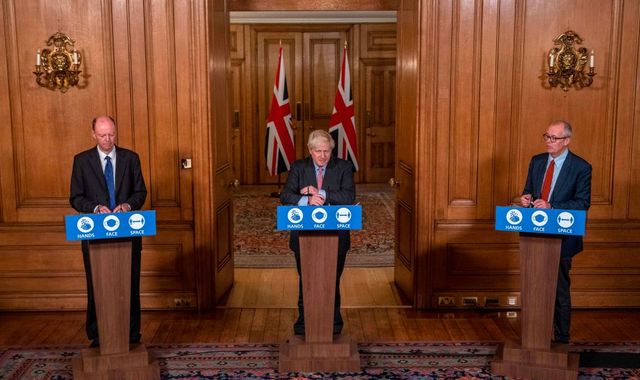 Boris Johnson has warned Britons that the "only way" to avoid a new national lockdown is to follow the latest coronavirus rules.

The prime minister, flanked by his chief medical and scientific advisers for the 100th coronavirus briefing from Downing Street since the start of the pandemic, said the UK faced a "critical moment" in the fight against COVID-19.

England's chief medical officer Professor Chris Whitty said there had been a "significant uptick" in the number of coronavirus patients in intensive care in northeast England, northwest England and London.

"The direction of travel for both hospitals and intensive care is going in the wrong direction, particularly in the areas that have seen rapid increases in cases," Prof Whitty said.

Sir Patrick Vallance, the government's chief scientific adviser, admitted "we don't have this under control at the moment".

He also warned: "This is headed in the wrong direction, there is no cause for complacency."

Earlier on Wednesday, it was announced that another 7,108 coronavirus cases and 71 deaths had been recorded in the UK.

Prof Whitty said that, although the virus was not doubling as quickly as it was in March, it didn't mean parts of the country couldn't soon be badly affected.

"This small number of deaths now shouldn't reassure us that we won't be, in relatively short order, in quite difficult places, certainly in the regions where we are seeing significant growth at the moment," he said.

And Sir Patrick added that "it would be wrong" to think the virus was only a problem in certain parts of the country.

"It is worse in certain areas, but there is evidence of spread everywhere and we need to be mindful of that - everyone needs to take precautions across the country," he said.

Mr Johnson recently introduced the "rule of six" in England and last week imposed a 10pm curfew on pubs, bars and restaurants.

He made repeated pleas for the public to follow the new national restrictions, as well as the localised measures that have been introduced across large parts of the UK.

The prime minister also refused to rule out further measures to slow the spread of transmission.

He said ministers and scientists would have to "watch what's happening" with their aim to avoid another national lockdown, as was enforced in the spring.

"What we are not doing at the moment is going back to the situation we were in in March," Mr Johnson said.

"And, I really don't want to do this. I don't want to go back to a national lockdown where the overall guidance is stay at home, that is not what we are saying.

"But the only way we can do that is if we all follow the guidance and depress the virus."

Mr Johnson said the prospect of new national restrictions was "entirely dependent on how effective we are now in collectively driving down the virus".

"We know we can do it because we did it before, in March and April," he added.

But the prime minister suggested the virus may now be spreading in a different way to how it was in March.

"We are seeing some very clear local peaks," he said.

"It may be that this is a more localised phenomenon this time in which case all the more reason for us to concentrate on these local solutions as well as these national solutions."

Mr Johnson was forced to apologise on Tuesday for getting confused by his own coronavirus rules.

He urged people to use their "common sense" as well as to check the internet for the latest restrictions in their local area.

"People will pick up on various discrepancies or complications, complexities that have arisen as a result of this local approach," he said.

"The best thing I can tell you is that everybody in the North East or elsewhere, in Merseyside, the Midlands, everywhere there are local restrictions, get on the websites, look at precisely what you're supposed to do.

"So much of this is about common sense and about following the basics of the guidance and just restricting the possibility of transmission from yourself to somebody else, or from somebody else to you."

The prime minister also repeated his dismissal of those who believe "we should give up and let the virus take its course despite the huge loss of life that would potentially entail".

"They want to fight and defeat this virus and that is what we are going to do."

Labour leader Sir Keir Starmer said there would have to be a "national effort" to avoid a second nationwide lockdown.

But he added the "government's side of the bargain here is to have a very clear strategy for keeping that infection rate down and we don't see that strategy".

He also called for an "urgent review" into whether local lockdowns were working in the way they are intended to bring down infection rates.