'It sounded like an explosion': Strong winds rip roof off building in Slough 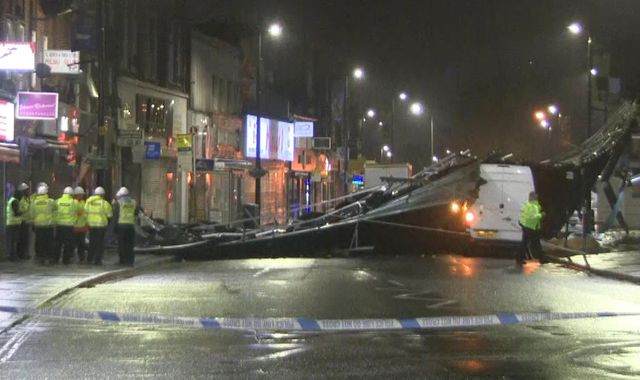 Strong gusts have ripped a large section of roof from a building in Slough amid dangerous winds which have hit many parts of the country.

Videos and photos captured at the scene show pedestrians trying to navigate around the huge section of metal on the ground, which is believed to have been blown off a nearby residential and commercial building.

Thames Valley Police said it did not believe anyone was seriously injured, while a spokesman for Royal Berkshire Fire and Rescue said they were not aware of anyone trapped beneath the debris.

The spokesperson added that it was not yet clear whether anyone was still inside the damaged building.

"The roof has come off in the wind," the spokesperson said, adding: "The current situation is trying to make the scene safe."

Police have since closed Slough high street and have advised people avoid the area.

South Central Ambulance Service and a structural engineer are also at the scene.

Speaking to Sky News, eyewitness Mo Khamis said the incident "sounded like an explosion" as he saw the roof drop.

"I saw an injured homeless guy, it landed on his leg," he said. "An ambulance took him."

Mr Khamis, who said his brother worked in a butchers nearby, added: "It was very scary. I was just hoping that nobody was underneath. It was lucky it wasn't the weekend."

Taxi driver Haris Baig, 30, described the moment he was driving down the road and saw the roof hit the floor in front of him.

He said: "At first I thought it was scaffolding, but then I realised the whole roof had come down. There was a massive amount of noise.

"I was about 15 metres away and slammed on my brakes. I got out to see if everyone was alright.

"That was my first reaction, but at the same time I was thinking is this even safe?"

Mr Baig added: "It was a disaster. It was a miracle no one was killed."

In a brief statement, Paradigm Housing said it was "aware of an incident" affecting one of its properties in Slough.

It added: "We are staff on site and are working with the emergency services and supporting residents."

The incident comes a day after Storm Brendan swept through the UK, bringing winds of up to 90mph and forcing delays and cancellations to numerous transport services.

Weather warnings have remained in place after the storm's passing on Tuesday as another low-pressure front brought a fresh round of strong winds to much of England and Wales.

According to the Met Office, gusts of more than 50mph were recorded in the Slough area on Tuesday evening.

(c) Sky News 2020: 'It sounded like an explosion': Strong winds rip roof off building in Slough