Former England fast bowler Darren Gough says he was "really surprised" to see Stuart Broad left out of England's team for the first #raisethebat Test against West Indies at The Ageas Bowl.

Broad - England's second-leading wicket-taker of all time, with 485 Test wickets - had not missed a home Test match in eight years, since being left out of a dead rubber against the West Indies at Edgbaston in 2012.

But he was omitted from England's team for the first Test, with James Anderson, Mark Wood and Jofra Archer picked for the three seam-bowling berths alongside stand-in captain Ben Stokes and spinner Dom Bess.

"[I'm] really surprised," Gough said on The Cricket Debate, which you can listen to as a podcast in the player below.

"Because when you talk about sticking with players, I thought with the Broad situation, he has stood up and been counted for England over the past few years, when Jimmy (Anderson) has been limping out of games with injury.

"I would've played both Broad and Anderson in this game - I think they deserved that respect - and then I would've gone for one of Wood or Archer.

"In typical English conditions, the way I would've done it is, rotated Anderson, Broad and (Chris) Woakes - always two out of the three - and then have one of Wood or Archer.

"I think they saw, in St Lucia in the West Indies, the pace of Wood bowling against the West Indian batsmen, when he gets it right, he frightens them."

England's bowlers will have to wait a bit longer before being let loose on the West Indian batsmen, as Stokes elected to bat first after winning the toss and then only 17.4 overs of play were possible on a frustrating, rain-affected first day.

Before proceedings got underway in Southampton, players and squad members from England and the West Indies took a knee in support of the Black Lives Matter movement, while Michael Holding and Ebony Rainford-Brent both spoke powerfully on the subject - which you can hear again on the podcast.

Darren Sammy, a former West Indies captain, called for change from the top down, saying: "It's sad to hear the constant stories and know what is reality; what black people have had to face for hundreds of years.

"I'm a person of colour, a black man, and a proud one. Every time you hear a successful story of a black man, it's always against the odds.

"We live in a never-ending exam, where you have to try to pass it - but you don't get the tools to pass that exam.

"For things to change, it needs our leaders - the people in power, like Ebony said, have to be the ones to start implementing that change.

"The system has failed us for too long."

"I didn't expect to be blown away with the amount of emotion I was," said Greenway. "The way Ebony and Mikey spoke was really admirable; people talking from genuine experiences, with raw emotion.

"What we saw was the best way that sport can use a platform to promote positive change.

Watch day two of the first #raisethebat Test between England and West Indies live on Sky Sports Cricket from 10.30am on Thursday. 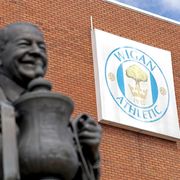