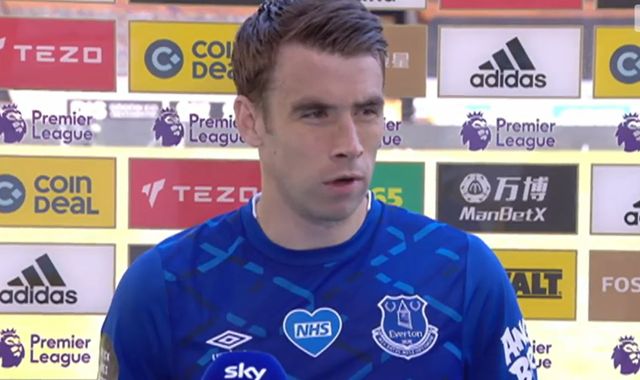 Seamus Coleman gave a frank and outspoken assessment of Everton's performance at Wolves, criticising the players' desire, commitment and attitude.

Wolves brushed aside Everton 3-0 at Molineux on Sunday with the visitors failing to compete with their opponents for large periods to the extent they only had one touch in the opposition box in the first 60 minutes of play.

The Toffees remain 11th in the Premier League having won two of their last nine games and with little hope of making a late push for Europe.

"No hiding places. They were better all over the pitch.

"We need to ask some serious questions of ourselves. We can all play bad, misplace passes but when the attitude isn't there and the desire isn't there. We got beaten by the better team.

"Quality-wise we've got good players but the attitude and desire wasn't there today. We need to have more commitment on daily basis and really come together.

"That won't be good enough for this manager. If we're not giving our all then that will be that, see you later. He's not going to put up with performances like this. As a team we need to be better. And ask ourselves if we're good enough to play for this football club.

Ancelotti: It was unacceptable

An equally frustrated Carlo Ancelotti agreed with Coleman's words: "The attitude of the team wasn't good. It's good to hear the captain taking responsibility.

"It was a really frustrating day and performance. The spirit of the team was unacceptable.

"There are some excuses but I don't want to have excuses, the performance was not acceptable. I spoke to the players and we have to prepare and work differently and have a different attitude.

"I don't want to talk individually about every single player. I said to them this attitude is not acceptable for me and we have to change immediately. I want to see a different spirit.

"If I have to be honest, in some games the spirit was really good. Liverpool, Norwich, Leicester. It's difficult to accept for this reason because this team has a fighting spirit."