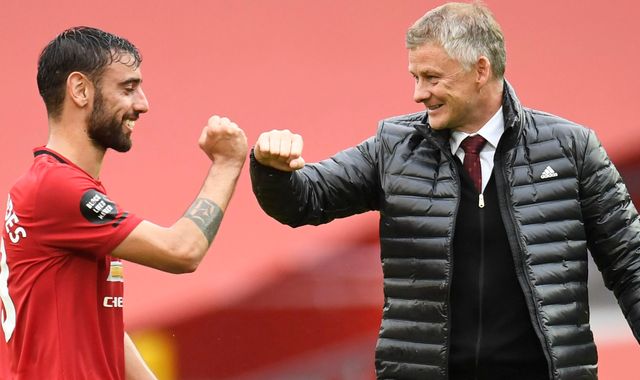 Manchester United can extend their unbeaten run to 17 games if they avoid defeat against Aston Villa on Thursday night.

You would not bet against United adding to their streak. They are unbeaten in 20 away games at Villa since losing 3-1 there on the opening day of the 1995-96 season.

It is the longest unbeaten away run by one team against another in top-flight history.

The current run proves United are trending in the right direction, but try getting manager Ole Gunnar Solskjaer to admit that.

"You can't talk about success when, first of all, it's only 16 games unbeaten. We had the tough spell in January, we're fifth in the league so you can't talk success," Solskjaer told Sky Sports.

"Yes we're in the semi-finals of the FA Cup and hopefully we'll proceed through the quarter-finals in the Europa League, so it's exciting times, but it's nowhere near being success yet."

Solskjaer speaks passionately but there is a steel to him too. It is no surprise his players emerged from lockdown fitter, stronger and faster. He had made it clear what he wanted from them in the weeks he could not keep an eye on them at Carrington.

"You're at the biggest club in the world, you do have a responsibility, you do have a privilege of keeping fit and if you don't have the discipline over two or three months to look after yourself, that's when I open the door and say 'find yourself somewhere else'."

Trust is a key word for most managers and Solskjaer is no different, he enjoyed the tightest of bonds with his United teammates in the '90s and has worked hard to develop a better culture behind the scenes at Old Trafford.

There have been big-name departures and the introduction of new faces, but the feeling right now is this is a more welcoming environment. The competition is fierce but so too is the belief that everyone is in it together.

"It's nice to see them going into games trusting themselves, trusting their team-mates, trusting what we should be doing in the game and the messages we've been giving to them.

"The focus has been fantastic, it's been great. The demands are here now, the players demand off each other in training, it's not like we go into training just to have a jolly about. We do have some tackles flying in and a competition for places."

Last week Nemanja Matic spoke to me about regaining Solskjaer's trust and enjoying being one of his soldiers again. The Serb is a prime example of the new spirit sweeping through Manchester United, when he feared earlier in the season he was heading for the exit door. Now he has got a new three-year deal and his manager has a long-term plan for a midfielder he believes is getting better and better.

"Nemanja is a very, very professional player with some great experience which he'll pass on to the youngsters. He's not played as much as he'd like to this season but there's not been any moment you'd think he wouldn't do his best.

"He came to training, worked really hard and he's shown everyone that when you're in this squad you'll have a part to play.

"Nemanja's such a top professional and I think he's improving as a player. I remember myself when I was 30 or 31 coming back working with Rene (Meulensteen)and adding things to my game. Nemanja's added some things to his game as well."

Part of Matic's role long-term will be to aid the development of younger players at the club, such as Scott McTominay, but right now he is providing the solid foundations in midfield to allow the likes of Paul Pogba and Bruno Fernandes to flourish.

So what of Pogba? Usually he is a topic for discussion in every interview with Solskjaer, but the story surrounding the Frenchman suddenly feels different.

"I think every player needs to focus on what's happening on the pitch and that's one of the big pluses," said Solskjaer

"If you look at the players, touch wood, there hasn't been so many injuries, players are fit and they worked hard. But I also think it's because you haven't got any of the noise around, you can't go out.

"I'm not just talking Paul now, I'm talking every single one of us, you don't go out to restaurants, you don't stay out at night, you stay at home and you recover and I think that's a big thing for these players.

"There's one career you've got, make the most of it. It's been interesting to see how there's been fewer niggles and how fit they've been."

The transfer window this summer is still uncertain due to COVID-19, but Solskjaer is anticipating adding further pieces to the jigsaw rather than making huge changes.

"I don't think it's going to be lots of surgery, no. I think it's fine adjusting of course but we're always looking to improve and we know we're behind where we want to be."

Eight years ago Solskjaer turned down the manager's job at Aston Villa because it was not right for his family, opting to remain in Norway.

What he is creating at Manchester United has the feeling of a home from home for the Norwegian, who has not been afraid of change nor the challenges which come with it.

His next task is to get his players to come up with an end-of-season charge that even he might consider a success.

Pogba: I feel blessed, I missed the team

Pogba says his extended period on the sidelines has further enhanced his love for the game and he's "really, really happy" to be back, playing his part in United's hunt for trophies and a top-four place.

The Frenchman's campaign had been derailed by injury since September 2019 but he has returned in good form since the resumption of the football in June.

"Just being back training, touching the ball and doing what I love is amazing; I missed it so much," he told the club's official website.

"You realise when you're out for a long time how much you really enjoy playing football and how much you love it. So obviously I'm really, really happy and so blessed to be back and be fully fit now, and I'm enjoying being back with the team.

"I feel great, I feel much, much better now. I've been training well and they [the club] have been looking after me very well.

"I've been doing some extra work and treatment on my ankle and the rest of my body. And my team-mates as well, they've helped me to come back and feel confident. It's like I never left, the guys still trust in me and always believe in me and that's helped me a lot as well."