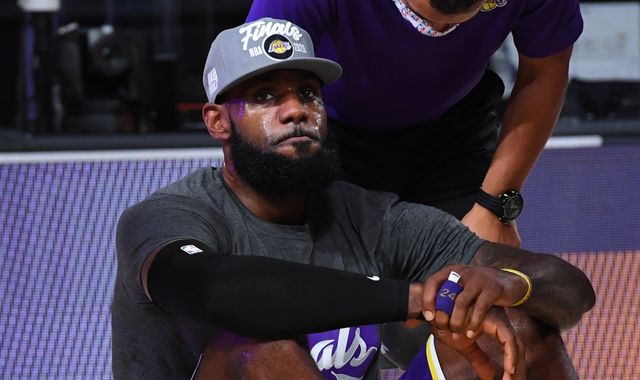 LeBron James said the Los Angeles Lakers have "bigger fish to fry" after leading his team to a series-sealing win over the Denver Nuggets in Game 5 of the Western Conference Finals.

James wore out the path to the NBA Finals in the Eastern Conference, making annual trips out of Miami and Cleveland. Now he is the best in the West.

And for the first time in a decade, so are the Los Angeles Lakers.

James punctuated his 27th postseason triple-double with a big fourth quarter, powering the Lakers to a 117-107 victory over the Denver Nuggets on Saturday night to win the Western Conference finals in five games.

James finished with 38 points, 16 rebounds and 10 assists to become the fourth player to reach 10 NBA Finals. It took him two seasons to make it with the Lakers, after falling short of the playoffs in an injury-plagued first season following eight consecutive trips with Miami and Cleveland.

"My team-mates said, 'bring us home', and it's my responsibility to try to make the right plays and do the right things out on the floor to help us win ball games. We have a few guys on our team who haven't been to the Finals before so we took that responsibility as well," James said after the Lakers were presented with the Western Conference Finals trophy.

"My shoulders are wide enough to a lot of load but my mind is stronger. I always keep my mind strong and I'm happy to be in this position.

"There are only two teams that can advance to the Finals each year. Pretty much 30 players who advance (to the Finals) every year. We are going to enjoy it tonight but we understand we have got bigger fish to fry. We understand there is a bigger goal but we can't take this for granted because it doesn't happen every year for anybody."

Speaking to reporters after the game he added: "For me personally the job is not done. For us as a franchise, I'm extremely proud to be a part of this franchise getting back to where it belongs and that's playing for championships and competing for championships, representing the Western Conference this year in the championships. This is what I came here for."

The Lakers will face either Miami or Boston in their 32nd NBA Finals appearance, the most in league history. They haven't played for the title since beating the Celtics in 2010 for the last of their 16 championships and hadn't even made the postseason in the last six seasons.

Anthony Davis added 27 points and will end his first season with Los Angeles by playing in his first NBA Finals.

"We battled through a lot this year starting with the beginning of the season and we know the job is not done," Davis said during the trophy presentation. "It's a great feeling but we have got four more to win."

The Nuggets have made comebacks their signature during a postseason run that has seen them recover from 3-1 down in the first two playoff rounds. They fell far behind one more time in Game 5 but James wouldn't allow another comeback. He scored 16 points in the fourth quarter.

James made consecutive baskets while getting fouled early in the fourth, pushing a two-point lead to 95-88. When Denver made one last push to cut it to four, James set up Danny Green for a three-pointer for his 10th assist, then made a jumper himself to extend it to 108-99.

"I don't know if I've ever witnessed a guy take over a game the way he did in the fourth quarter tonight in person," Lakers coach Frank Vogel said.

Denver coach Michael Malone noted the difference in experience between his young team and James, who tied Kareem Abdul-Jabbar for third all-time with his 10 Finals appearances.

"We were playing against a guy who this is routine for him and so we take some solace in that," Malone said, "and my challenge to our group is that we'll be back."

Only Celtics Hall of Famers Bill Russell, with 12, and Sam Jones with 11 have reached more NBA Finals than James.

Want to watch even more of the NBA and WNBA but don't have Sky Sports? Get the Sky Sports Action and Arena pack, click here.