When Julian Speroni got on the microphone to say his Selhurst Park goodbyes at the end of last season, Crystal Palace fans would be forgiven for shedding a tear. They’d surely never see his like again.

Humble, passionate, a role model and most importantly a damn good goalkeeper. But little did they know the heir to Speroni's crown was already out on the pitch, clapping furiously in respect of the retiring Palace legend.

The gloves have been passed on and are in Vicente Guaita's supremely safe hands. He was good in his first season but he's now become irreplaceable in his second.

"I love and enjoy life at Crystal Palace, they are my fans," Guaita told Sky Sports.

One thing is clear about the goalkeeper, whose charisma has made him a firm favourite at Palace: he is someone that appreciates human connections. As he puts it: "My life is my family."

His wife and children moved with him from Spain to London when Palace won the race for his signature in 2018 from Getafe - a transfer which is fast becoming, arguably, one of the best free transfers in Premier League history.

Palace didn't pay a single penny for his signature and he's established himself as the club's key player. He'd be long odds-on to sweep the board at the Palace end of year awards such has been his influence as the club have cemented themselves firmly in mid-table.

I challenge you to think of a shrewder free transfer in recent seasons.

But it's hard to argue against Guaita, the fantastic freebie.

"I love and enjoy life at Crystal Palace," he said.

Since Guaita signed, Palace have become one of the hardest defences in the Premier League to break down, something that Aston Villa will find out on Sunday, live on Sky Sports. There will be a Spanish flavour protecting the nets at both ends with Guaita's compatriot Pepe Reina, still proving age is just a number at 37, likely to start for the relegation-threatened Villa.

Guaita, 33 himself, is finding out that the more grey hairs he finds, the more his career takes off. The fine wine theory is common for goalkeepers and Guaita wants to follow Reina by playing in the Premier League for as many years as he can.

"I've never spoke to him but some of my friends speak with him but I know he's a good person," Guaita said of the Villa man.

"He's had an impressive career, an amazing career.

"Sometimes age is important. It's important you play, play, play. Maybe you don't do good for a few games but you can be good for a lot of games. But the problem is when you play a lot, it's tiring. Pepe is 37, Ben Foster is 37, Heurelho Gomes is 40, that's crazy - but I'm 33 and I want to play for many more years."

If Villa manage to get through Roy Hodgson's well-drilled backline, then Guaita will be waiting to deny them with his outstanding shot-stopping technique, something he has likened to his former teammate at Valencia, Santiago Cañizares.

Only Liverpool, Manchester City and Chelsea have kept more than Palace's 22 clean sheets since the start of last season.

Analysing how important goalkeepers are to their team is a hard science to nail down. It's probably why so many - like Guaita - get overlooked in terms of analysis within the wider media with those that make important saves at important times usually gaining the plaudits whilst consistent performances - an absolute key attribute between the sticks - rarely generate much buzz.

It's easy to allow a top-class goalkeeper to fade into the background.

Looking at save percentage numbers aren't a reliable source due to the inability to analyse how dangerous each shot that the goalkeeper is dealing with. Guaita fares well in that department, ranking behind only Alisson and Hugo Lloris in the past two seasons with a 73.15 per cent record.

However, the best method to find the true value of a goalkeeper to their team's worth is to measure expected goals from shots on target to the actual expected goals data. The 'expected goals on target' model includes the original xG of the shot but also the goalmouth location where the shot ended up. It gives more credit to shots that end up in the corners compared with shots that go straight down the middle of the goal.

Finding the numerical difference between the two leads us to a reliable figure of how many good goalscoring opportunities have been stopped by the goalkeeper in question. Goalkeepers can then be ranked according to how much the average goalkeeper would be expected to save, given the quality of attempts faced.

From goalkeepers that have made 50 or more appearances in the Premier League over the past two seasons, Guaita ranks as the third best goalkeeper in the league in that regard. Only Martin Dubravka - another underrated goalkeeper - and Premier League winner Alisson have better figures. 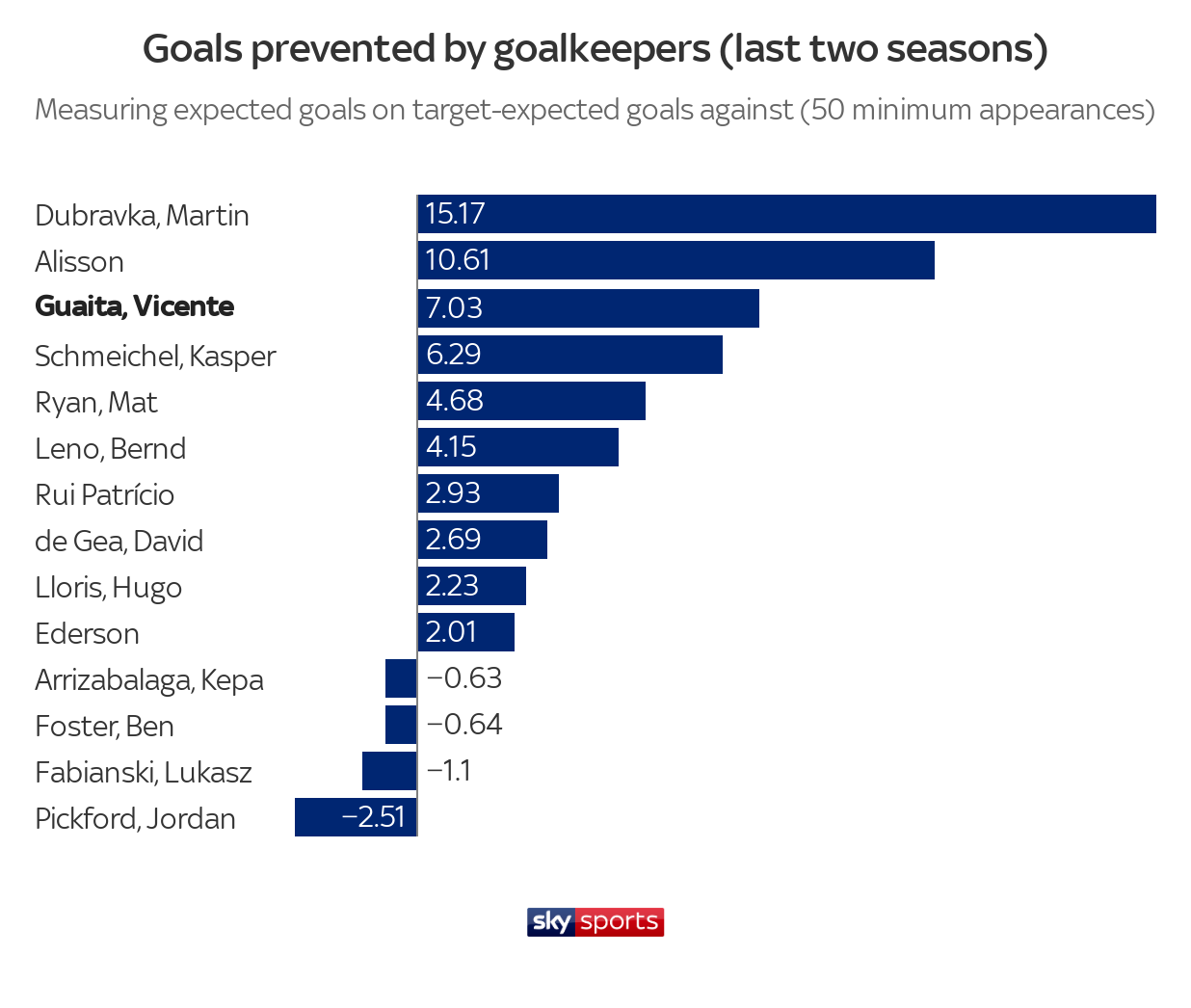 Mistakes are rare, too.

Many had to rub their eyes to make sure they were seeing clearly when the Palace goalkeeper's indecision helped Leicester take the lead in the recent 3-0 defeat at The King Power. That uncharacteristic blip was just his second error leading to a goal since the start of last season - as you can see from the below table, it's a record that puts plenty of international goalkeepers to shame. 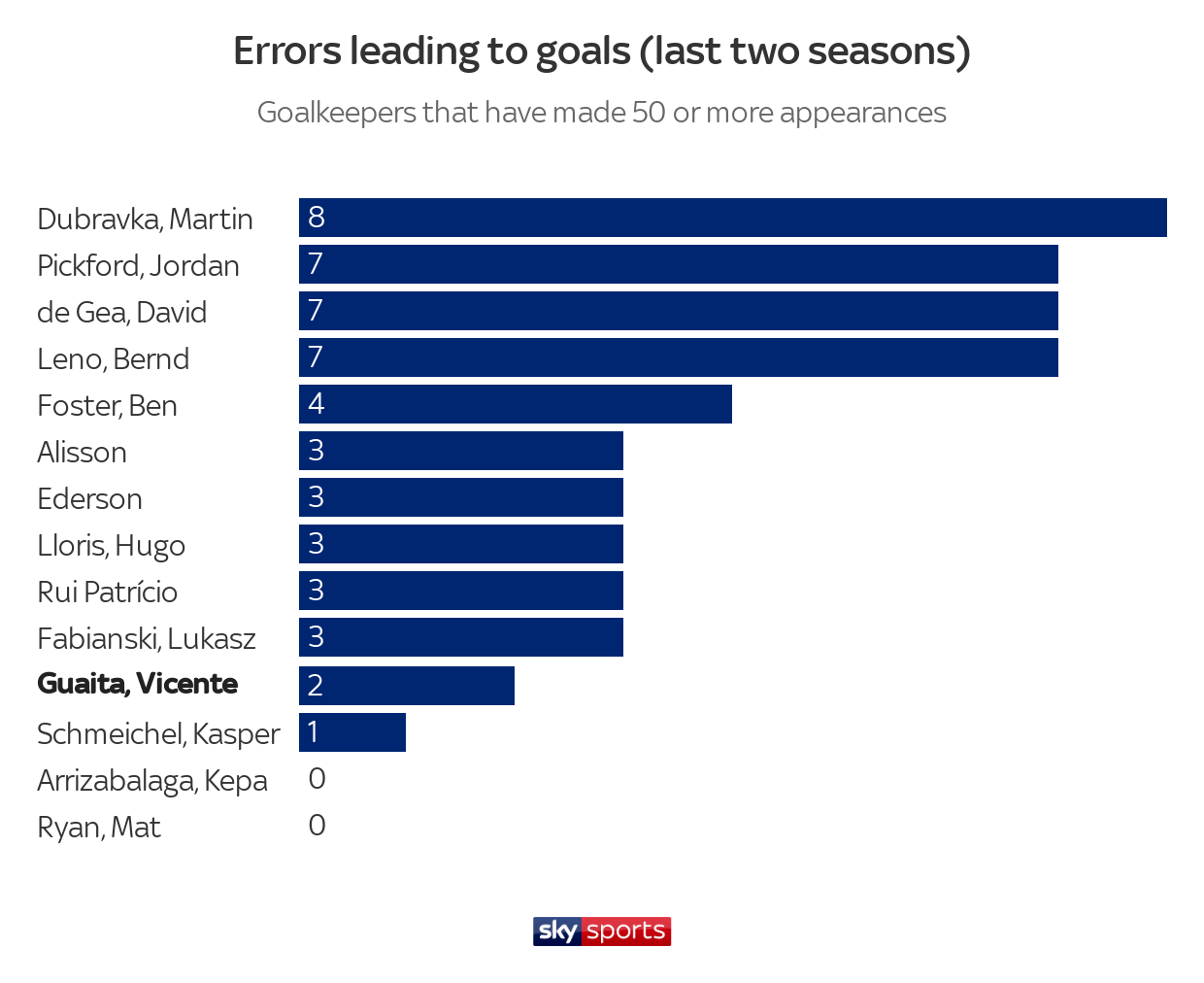 Only Kasper Schmeichel, Kepa Arrizabalaga and Mat Ryan have made fewer errors leading to goals.

The fact Hodgson's side have recorded eight Premier League wins by a one-goal margin this season, with only Liverpool, Chelsea and Sheffield United having more, underlines Guaita's importance to the club

They say the best things in life are free. Guaita is a prime example.