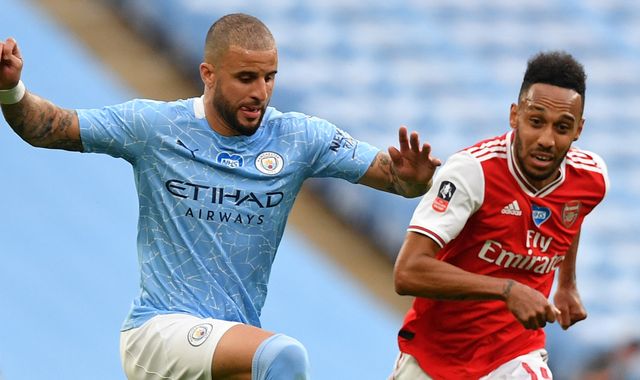 Mikel Arteta, whose Arsenal side saw off Liverpool on penalties to reach the last eight, got the better of Guardiola in the FA Cup semi-finals last season en route to winning that trophy and the Spaniard will be hoping history can repeat itself against his fellow countryman in this competition.

Tottenham face an away trip to Championship side Stoke City, who knocked out last year's finalists Aston Villa, while Brentford will host Newcastle in the club's first League Cup quarter-final match.

"Great draws. The one that stands out is Pep Guardiola vs Mikel Arteta - Arsenal are in really good form. It depends on what teams are put out but anything can happen and at this stage you're really close to a major trophy. I've been very impressed with Arsenal and it's going to be a very good game against City. Arteta was smiling about the draw - they're good friends but he'll still want to win!"

"Everton are in good shape too with Dominic Calvert-Lewin in form. For Ole to get a trophy and quieten everyone down would be so important. And it's a good draw for Tottenham - even though they'd want to be at home.

"Brentford-Newcastle is a tough one to call but I wouldn't be surprised if Brentford were to edge that one."

"I'm really happy with the performance. The boys were exceptional. We controlled the spaces they like to have, we competed much better for first and second balls - the aggression was really high and put them under pressure.

"I was here, enjoying the victory a little bit - and now we have to play Man City! There are some tough teams now in the competition. It's a big challenge. We want to take every opportunity to win a trophy."

Carabao Cup fourth round - all the free match highlights