The mini-Genesis reunion happened at Phil's solo gig in Berlin last Friday (June 7), when they surprised his fans by performing a version of ‘Follow You Follow Me’.

The 1978 song was the first track taken from Genesis’ ninth album, …And Then There Were Three….

Fan footage from the gig shows Mike hug Phil when he walks onstage, and is then handed an acoustic guitar. After huge applause from the audience, Phil says: “I think we’ll have it one more time – Mr. Mike Rutherford!”

Phil and Mike last shared a stage together back in 2007 for Genesis' huge reunion tour, which marked the band’s 40th anniversary.

“This is nostalgia seeing these two together again. Genesis still not dead yet,” one fan said. Another added: “Very nostalgic and a very big moment.”

Mike's band Mike + The Mechanics had also performed earlier in the evening, with the group supporting Phil on his current tour.

Last year, Phil Collins said that he’d be up for a Genesis reunion, but only if his son could drum for the band.

“I did mention to Tony [Banks, keyboardist] very quietly if we did anything again it would be with [son] Nic on drums,” he explained. “He kind of didn’t say no. But I’m not sure if he heard me or not.” 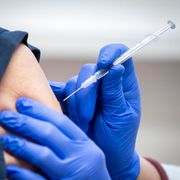