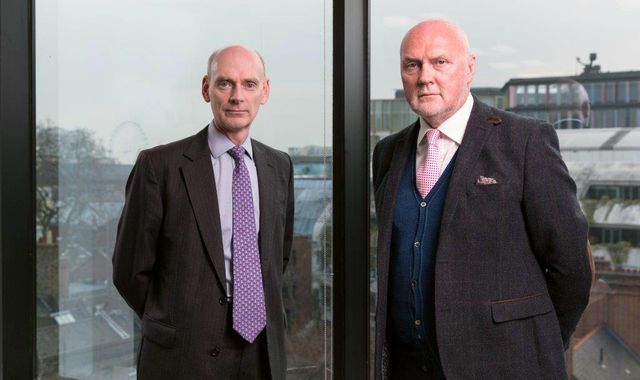 The former Co-op boss who helped save the mutual from collapse in 2013 will this week be named as the next chairman of Britain's biggest poultry production empire.

Sky News has learnt that Richard Pennycook, a former finance director at the supermarket chain Wm Morrison, will be unveiled at the helm of 2 Sisters Food Group (2SFG) on Wednesday.

Mr Pennycook, who chairs the online travel agent On The Beach, will replace Lord Allen of Kensington, the former ITV chief executive.

The appointment of a respected food retailing veteran at 2SFG is likely to reassure key customers - which include Britain's biggest grocers - after a difficult period for the company.

Supermarkets including Asda and Tesco were briefed on Mr Pennycook's appointment earlier this week, according to one retail insider.

The former Co-op chief executive, who left the mutual in 2017 having helped steer it back from the brink of financial ruin, also chairs the British Retail Consortium, where his term is due to end later this year.

2SFG is controlled by Ranjit Boparan, who is known as the 'chicken king' because of his vast interests in the poultry production sector.

The company is among Britain's largest private sector employers, with a workforce of about 18,000 people.

It also owns brands such as Fox's Biscuits, which is expected to be sold later this year as Mr Boparan seeks to reduce its big debt pile.

The shake-up of senior leadership came two years after 2SFG was hit by a food hygiene scandal prompted by a Guardian and ITV undercover investigation which revealed a widespread failure to adhere to industry standards.

2SFG's parent company, Boparan Holdings, has £630m of debt repayable in 2021 in the form of high-interest bonds.

It has been steadily selling assets in an effort to reduce its debt pile, including Goodfellas, the pizza brand, and more recently Matthew Walker, the UK's biggest supplier of Christmas puddings.

Besides Fox's, further disposals will follow, although 2SFG's substantial ready-meals operation is unlikely to be put on the block.

Despite its difficulties, the company's recent financial performance has been improving, with quarterly profits showing significant uplift over the last few quarters.

2SFG's ability to invest in its operations has been hampered by the fact that it has to meet an annual bill of more than £50m in interest payments alone.

City sources say the company intends to buy back bonds in order to reduce that burden as part of a broader refinancing.

More than 15,000 of 2SFG parent company Boparan Holdings' employees are based at various manufacturing sites across the UK.

Mr Boparan also owns restaurant chains including Ed's Easy Diner and Giraffe, as well as Slim Chicken, a new concept which is said to be performing strongly.

A spokesman for 2SFG declined to comment on Tuesday evening.